By JesseRod - April 30, 2019
There have been a few struggles recruiting for the Kingdom Finance Program on site at the Nehemiah Center. So we decided to take the training on the road and partnered with a local ministry called Villa Esperanza. The director Wilbur's sister Shirley is one of our stand out graduates and he has saw the change in her lifestyle as a testimony to the the programs impact within his own family. When we met with Wilbur to pitch the program to him, I started telling him about Shirley, but I didn't know she was his sister! "Jesse, I believe you what you say about Shirley." He said with a big smile on his face, "did you know she was my sister and lives right next to me?" My eyes got wide, "No, I had no idea!" "I saw the beginning of changes in her lifestyle and I hear the way her and her husband Rodney speak about their finances now. I would like our pastors to take this course and I will take it with them!"

"Ok, Wilbur let's get it on the calendar!" I replied.

Wilbur explained what Villa Esperanza's focus is. They provide shelter and a safe place for young girls who's families live at the trash dump in Managua. He told us some of the girls families would sell them for access to the best trash dump sites. When I heard that, it hurt, and I knew we had to bring our best for their pastors. These pastors work with the girls and some of their families.

After a few weeks of promotion we started the course with ten pastoral couples and a few Villa Esperanza employees! Freddy is back with us and facilitating the courses once again. Our first session was full of excitement and good discussion. Although not all the pastors had decided to buy in on the first day, they were ready for next weeks courses.

We started our second session and Freddy and I were doing well, but for some reason something changed when we arrived at the savings portion of the course. Attitudes began to doubt and we wrestled more with cultural norms. I felt the spirit of poverty attacking our participants. They pushed back on what they were hearing, some became frustrated and questioned Freddy's examples and lectures to the point he couldn't continue. I knew we needed God's help at this hour and I began to pray. I stepped in to help Freddy and we spent extra time reading the Bible and discussing the examples shown in the Word of God. Soon after attitudes changed, the spirit of poverty was broken once again and we continued with the session. How powerful is prayer and the Holy Bible!

We know satan and his little buddies are angry, and they were trying to attack our ministry efforts. Glory to our Lord Jesus Christ this battle has already been won! Like a Gospel Gangsta's lyric, "Bible woopin demons, satan K all day!"

After the second session a few pastors decided to stay over and ask questions about their budgets. They had small businesses. One has several rental properties, another owns a school transportation service, and another is an electrician. We spent an extra half hour together going over business finances and the need to separate them from their families budget.

In the final session they worked on budgets and  their commitments. Soon after class started the pastors began sharing testimonies and confessing with one another their money 'sins' as they called it. These confessions were centered around bad communication between spouses, and not working together. The participants said they are talking now and are beginning to make financial decisions together!

Once again I spent some extra time with the pastors who own businesses, guiding them on their business and family budgets, and reinforcing their heavenly calls to lead businesses as well as their churches. After graduation we set up mentoring time a month later to continue to encourage new money habits and worship God with our finances.

Impacting businesses, impacting churches, and creating changes to view our world as God sees it! This Kingdom Finance class at Villa Esperanza had a triple impact! First the workers at Villa Esperanza can work towards better money management and do more with their salaries. Second the pastoral couples are working toward financial freedom, better family communication, and will soon bring these teaching to their congregations. Lastly, all of these individuals who care for those girls, can continue to show them the love of Jesus, with a heart that feels more freedom every day as they bring their finances to God. Please pray for this group, and the very important work they are doing with Nicaragua's young women. 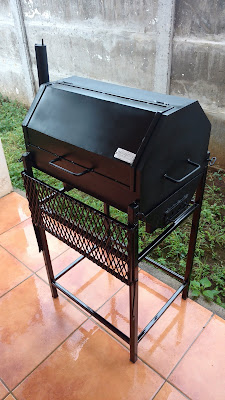 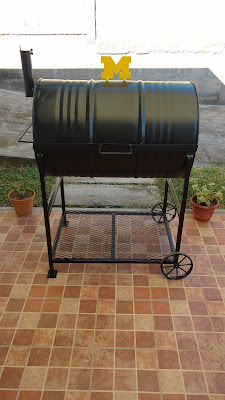 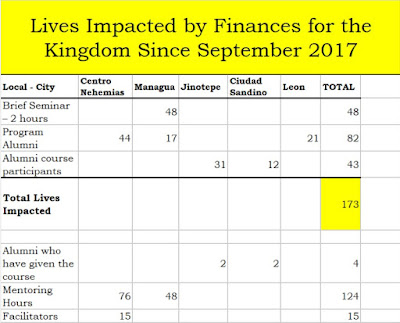